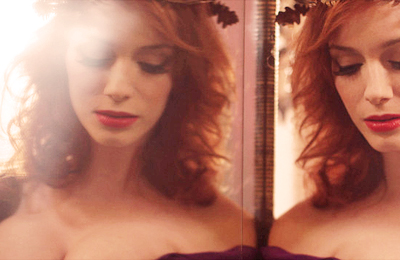 If you follow me on Tumblr you must be more than aware of the fact that this situation has reared its ugly head again. I can't be rational about The Hunger Games. More accurately, I can't be rational about Katniss/Gale. I just have a lot of feelings. Having spent the last few weeks knee-deep in poetry which reflects these kids and their devastatingly tragic relationship, it's hardly surprising that I moved on to music. This has been sitting half-finished in itunes for almost 2 years so really it's about time!

the past and pending.
LISTEN | @tumblr

Notes: This pretty much charts Katniss and Gale's relationship from the beginning of THG but it isn't tied to specific events in the novels. Instead, it moves through three phases moving from their life in the Seam through to the rebellion and its aftermath. The early songs focus on their togetherness and shared experience. Tracks in the middle are based around their differing attitudes towards rebellion and the wedge that drives between them. The final few songs describe the aftermath of the rebellion, K/G's physical separation and emotional distance. Tonally the songs could perhaps be described as distorted folk because K/G represent nothing if not the disintegration of a rural idyll.

Anyway, enjoy! If you have any questions or otherwise want to cry over these two with me then feel free to leave a comment!

snow patrol - lifeboats
flashed up in my wildest dreams, but like red blood streams,
Stretch out like vast cracked ice
the veins of you, the veins of me, like great forest trees
pushing through and on and in
gliding like a satellite in the broken night
and when I wake you're there I'm safe
your love is life piled tight and high set against the sky
that seems to balance on its own


coldplay - careful where you stand
i'm safe when I am with you
and I feel warm if you want me to
i am cured, when I'm by your side
i'm alright


the shins - the past and pending
as someone sets light to the first fire of autumn
we settle down to cut ourselves apart.
cough and twitch from the news on your face
and some foreign candle burning in your eyes

held to the past too aware of the pending
chill as the dawn breaks and finds us up for sale.
enter the fog another low road descending
away from the cold lust, your house and summertime.

bright eyes no one would riot for less
so love me now, hell is coming
kiss my mouth, hell is here

little soldier, little insect
you know war it has no heart
it will kill you in the sunshine
or happily in the dark
...
so wake, baby, wake
but leave that blanket round you
there's nothing as safe
i'm leaving this place
there is nothing I'm planning to take
just you, just you


gianna lauren - become what you can't be
thank you for the insight
fuelling a compromise
presenting opposite sides
you have something for me, could be identity
let’s make the possibility
my head is so far from what I can see
i live and breathe where and what I can’t be
who finds the time to feel in this ripped up translation, versions of reality?


kings of convenience - parallel lines
what's the immaterial substance
that envelopes two,
that one perceives as hunger
and the other as food.
i wake in tangeled covers,
to a sash of snow,
you dream in a cartoon garden,
i could never know.
innocent imitation, you are cast in gold,
your image a compensation for me to hold.

parallel lines, move so fast,
toward the same point,
infinity is as near as it is far


death cab for cutie - the ice is getting thinner
we're not the same, dear, as we used to be
the seasons have changed and so have we
there was little we could say, and even less we could do
to stop the ice from getting thinner under me and you

city and colour - silver and gold
i woke from the dream in a cold cold sweat.
i was full of doubt and deep regret.
for suddenly it was all so clear to me;
there was nothing left in which to believe.

and everything i loved and feared had all at once disappeared This album could kill me.

Also, you all need to read the Choas Walking trilogy and come talk to me about it. Consider this a primer of sorts...

I think we can now we officially call 2012 the year that I completely lost my shit over YA. Between Insurgent, Spell Bound, The Montmaray Journals and The Hunger Games I think I have lost all ability to care about things in the real world. I live for the dilemmas of fictional teenagers. That graphic was originally going to be a fanmix cover but I’m really anally retentive with fanmixes. I spend my life judging mixes that don’t get the balance right between choosing tracks that make sense lyrically and making sure that everything fits together tonally! Austra’s ‘The Beast’ is a perfect song for Tris...

The morning that I was born again,
I was made into a beast.
Am I free now, am I at peace?
Is that the ground below me, or your feet?

PERFECT YES?!?! BUT if you pick tracks that fit that then the mix would be too delicate given that the books are fairly dark/violent... I guess I'll leave the fanmixes to the pros and just ramble about my feelings instead... Next time we commit love, we ought to choose in advance what to kill. I was going to do the standard year end top 5s but my interests have been so erratic that it seemed more sensible to just lump everything together. I'd like to state for the record that I really did try to make this look less ugly but this new LJ formatting just isn't playing fair! WARNING: IMAGE HEAVY. I made it to the north in one piece. The house is fine though I’m going to have to splash out a whole £10 to get a bookshelf from Ikea because all my textbooks are piled up in my desk which is making for bad studying feng shui! Term hasn’t started yet but I’ve spent the week on newspaper databases trying to do some preliminary research for my DPhil application. Current title: ‘Presenting female physicality: Media coverage of women’s sport in inter-war Britain’. I’m really REALLY hoping that my favourite tutor from my undergrad will be willing to supervise me so I’m going to email him with my ideas tomorrow and see what he makes of them. TERRIFYING.


Speaking of terrifying, I was cowering behind a cushion the whole way through this week’s Downton Abbey!